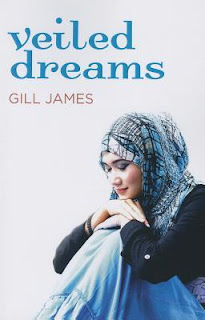 Summary: Feisty fifteen-year-old Christina's parents don't like her biker boyfriend. They think he's too old and his hair is too long. She doesn't like her epilepsy but has to deal with it. An accident leaves her in a coma for several weeks. Whilst in the coma she visits another world where she starts to understand her own awakening sexuality and her illness. She also becomes more tolerant of other people, in particular of those who wear a hijab or burka. But Jan is still waiting for her at home and her new world is getting more real by the minute. Problems abound and she feels alone. She is still in love with Jan, but can she still reach him?

My Thoughts: My favorite part of this book is when Christina is in another world. Gill James does a great job in a brief amount of text transporting the reader to a different land. Christina obviously has many adjustments to make as she transitions to a new culture and her experiences are intriguing. Part of her learning involves wearing the veil and appreciating some of its benefits. Many things are terribly confusing for her in this alternate land, but she finds friends on her way and even a bit of romance. The whole adventure is on the exotic side and tension rises as the reader is unsure of whether Christina will be able to get back to her real life or if she will be trapped in this other world.

In Christina's real life, she was having difficulties dealing with her dating relationship. I found her to be immature and selfish. I couldn't really understand what Jan saw in her honestly, but the author didn't specifically show why he adored her so much, but simply stated that he did. In the other world, Christina managed to mature a little through the events that transpired, but I was still left feeling that she was not ready for a serious relationship. There have been posts online about whether characters need to be likeable. I found that Christina wasn't especially likeable in my mind, but I felt that she didn't necessarily need to be. Later in the story, I determined that she was so young that her behavior made sense even if it wasn't terribly attractive.

This book was written with a European perspective so I did notice a few terms that were unfamiliar. One that stuck out to me was the references to IB textbooks and the exams that go with them. It was certainly not essential for the storyline at all, but I did notice things that made me pause for a second as an outsider. I found that made the book more interesting to me rather than just being a distraction.

I would have liked the book to be longer so the transitions could have been less abrupt. The development of the relationship with her boyfriend and the romance in the other world moved very quickly among other things. Often I would have appreciated more depth. The pace did keep the story lively and engaging though, and the other plus is that the book can be read in a short amount of time.

Veiled Dreams has a relatively unique storyline with a dash of romance and fantasy if you are looking for a light, quick read.

-- Cover image and summary via Goodreads