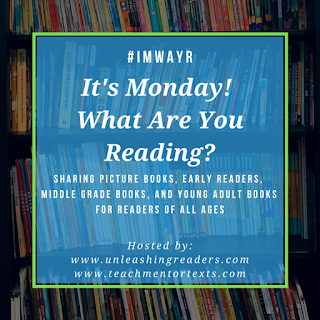 It's Monday! What are you Reading? is a meme hosted by Kathryn at Book Date. It's a great way to recap what you read and/or reviewed the previous week and to plan out your reading and reviews for the upcoming week. It's also a great chance to see what others are reading right now...you just might discover your next “must-read” book!Kellee Moye, of Unleashing Readers, and Jen Vincent, of Teach Mentor Texts decided to give It's Monday! What Are You Reading? a kidlit focus. If you read and review books in children's literature - picture books, chapter books, middle grade novels, young adult novels, anything in the world of kidlit - join us! We love this meme and think you will, too. We encourage everyone who participates to visit at least three of the other kidlit book bloggers that link up and leave comments for them.

If you want to see more of my reading, visit my Goodreads shelves here.
Where Have I Been [Again]
This time, I have been out of circulation due to a fall I took a few weeks ago. I injured one of my legs and  have been slowly gaining more mobility. Winter in WI is not a great time to be on crutches, but I think I am almost ready to move around without them. I have another appointment next week to determine what we will be doing next. It's been fun navigating school this way, but have had a lot of students and staff that have been extremely helpful.
Most Recent Blogpost:
My 2021 Favorites at Rich in Color
Review of Concrete Cowboy & Polo Cowboy
Review of How to Find What You're Not Looking For
Recent Reads:
I read two fun Young Adult books this past week. Huda F Are You? is a great graphic novel fictionalized memoir [is that the correct designation?]. Huda and her family moved to Dearborn, MI when she was starting high school. She had previously lived in a place with few Muslims and in Dearborn, she was one of many young women in hijab. It's interesting to see how she works through who she is beyond that one piece of material that had been shorthand for her whole self in the past. I also read the rom-com Miss Meteor for a book club and really enjoyed the relationships and the fantastical elements of the book.
As for middle grade books, I read and loved How to Find What You're Not Looking For and revisited Concrete & Polo Cowboy [see reviews above]. I also finally picked up The Boy Who Became a Dragon: A Bruce Lee Story. It's biographical, but much is fictionalized as the author didn't have enough information and filled in the gaps. That aspect is troubling to a certain degree, but it does spark a desire to know more about him. I had non idea he died so young.
I really enjoyed Roots Run Deep by Zetta Elliott and King Sejong Invents an Alphabet. Both had a lot of great history and again, made me want to know more. My Two Border Towns is excellent and is a great way for readers to see that there are many people who regularly cross the border. It's definitely a view that many may not have seen before and for those who have this experience, it's one of the few picture books that show this and how connected the lives can be from one side of the border to the other.
The Coming Week: I still have a few ARCs to read, but am slowly but surely catching up with my large pile. I hope to finally get to the bottom of the stack over winter break. I have been spending so much time with Spanish and Korean that my reading has really dropped off, but I am slowly finding a good balance. I wish you all well.
Posted by Crystal at 4:00 AM 4 comments:

Email ThisBlogThis!Share to TwitterShare to FacebookShare to Pinterest
Labels: It's Monday! 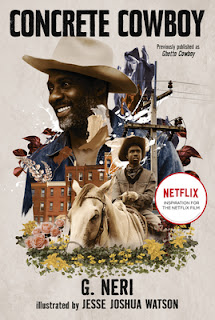 Publisher's summary: When Cole's mom dumps him in Philadelphia to live with the dad he's never met, the last thing Cole expects to see is a horse, let alone a stable full of them. He may not know much about cowboys, but what he knows for sure is that cowboys aren't black, and they don't live in the inner city. But in his dad's world, horses are a way of life, and soon Cole's days of skipping school and getting in trouble in Detroit have been replaced by shoveling muck and trying not to get stomped on. At first, all Cole can think about is how to ditch these ghetto cowboys and get home. But when the City threatens to shut down the stables--and take away the horse Cole has come to think of as his own--he knows that it's time to step up and fight back. Inspired by the little-known urban riders of Philly and Brooklyn, this compelling tale of latter-day cowboy justice champions a world where your friends always have your back, especially when the chips are down.

My Thoughts: I really enjoyed this book when I initially read it several years ago under the title Ghetto Cowboy. This was not only because it is well written, but also because it is about a neighborhood and way of life that I'd been unaware of before. Urban cowboys are certainly interesting and seeing that community working together was fascinating.

Seeing Cole and his father adjusting to each other was powerful. The interactions and relationships in the story are so compelling especially the one of father to son. I reread the book so I would be able to make connections with the sequel and then I also watched the Netflix movie. The book and the movie are both  worth reading and watching though since the movie includes some things from the second book, it's a good idea to read both before watching. Here's an interesting clip with the actors talking about the father-son relationship central to the story. 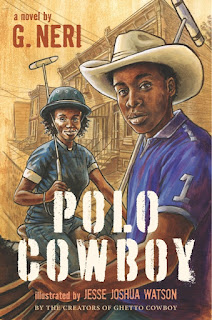 Publisher's Summary: When Cole moves in with his dad, Harp, he thinks life will be sweet—just him and his horse, Boo, hanging out with Philadelphia’s urban cowboys. But when Harp says he has to get a job, Cole winds up as a stable hand for the polo team at George Washington Military Academy, where the players are rich, white, and stuck-up—all except Ruthie, the team’s first and only girl, who’s determined to show the others she can beat them at their own game. As Cole and Ruthie become friends—and maybe more—he starts imagining his future, maybe even at the academy. But between long workdays, arrogant polo players, and a cousin trying to pull Cole into his dangerous business, that future seems remote. Will Cole find the courage to stand and be seen in a world determined to keep him out? With striking illustrations by Jesse Joshua Watson, celebrated author G. Neri’s novel weaves themes of tenacity and community into a rousing sports story inspired by Philadelphia’s real-life urban cowboys and polo players.

My Thoughts: Cole still has a lot to learn about horses, being a young Black man, and relationships. Watching him put in effort and yet stumble over and over is difficult. Polo Cowboy isn't an easy book to read, but it is meaningful. Again, it deals with a topic that was unfamiliar to me. Polo is not a sport I have much experience with and for most middle grade readers it may also be new to them, but since Cole is in the position of a newbie, there is plenty of explanation.

This is a great middle grade read that has the excitement of competition along with a bit of danger and a possibility of romance so there's a lot there to interest a variety of readers. It's one I can see many young readers enjoying. The addition of illustration is nice with both novels too. I hope to see many young readers picking up both books and getting to meet Cole and his friends and loved ones.

Posted by Crystal at 1:08 PM No comments:

Review: How to Find What You're Not Looking For 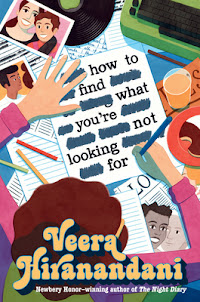 Title: How to Find What You're Not Looking For

Summary: Twelve-year-old Ariel Goldberg's life feels like the moment after the final guest leaves the party. Her family's Jewish bakery runs into financial trouble, and her older sister has eloped with a young man from India following the Supreme Court decision that strikes down laws banning interracial marriage. As change becomes Ariel's only constant, she's left to hone something that will be with her always--her own voice.

My Thoughts: If you've read The Night Diary, you will not be surprised to find out that this book is an excellent work of historical fiction. Once again, Hiranandani swept me back in time. She does an excellent job of providing the context of the events of the time and how they relate to the very personal issues that Ariel and her family are working through. There is a lot going on, but a middle grade reader will see how so many of these things are connected to each other.

I appreciated how the characters are complex so we can see that there can be many reasons for the way people are acting or reacting even when everything seems impossible to comprehend. We get to see the ways that Ariel is slowly piecing together what she is experiencing and is discovering her own opinions.

The cover art had me hopeful that there would be poetry and I was not disappointed. It's sprinkled throughout and really adds a lot to the story. I don't want to get too spoilery so I won't go into that a lot.

Recommendation: I see this as a great book to hand to readers who want a book with substance or simply enjoy books with a lot to think about. It also has the potential to be a fantastic read aloud with upper grade students. There is so much for discussion about family, friendship, bullying, and more. It could also lead to discussions of both historical and current events and how they can affect our lives. I would also add that one of my fourth grade classes was able to have a virtual author visit with the author the year The Night Diary was released. She did a fantastic job and my students were ready to read anything else she had already written or would ever write.