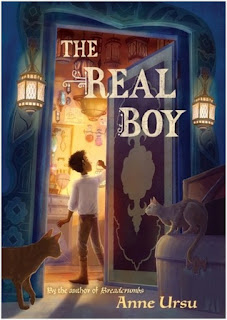 Summary: On an island at the edge of an immense sea there is a city, a forest, and a boy. The city is called Asteri, a perfect city that was saved by the magic woven into its walls from a devastating plague that swept through the world over a hundred years before. The forest is called the Barrow, a vast wood of ancient trees that encircles the city and feeds the earth with magic. And the boy is called Oscar, a shop boy for the most powerful magician in the Barrow. Oscar spends his days in a small room in the dark cellar of his master's shop grinding herbs and dreaming of the wizards who once lived on the island generations ago. Oscar's world is small, but he likes it that way. The real world is vast, strange, and unpredictable. And Oscar does not quite fit in.

But it's been a long time since anyone who could call himself a wizard walked the world, and now that world is changing. Children in the city are falling ill and something sinister lurks in the forest. Oscar has been content to stay in his small room in the cellar, comforted in the knowledge that the magic that flows from the trees will keep his island safe. Now, even magic may not be enough to save it.... -- Cover image and summary via Goodreads

My Thoughts: After reading Anne Ursu's beautiful book Breadcrumbs, I was very excited to have access to The Real Boy. I was not disappointed. Ursu pulled me right into the Barrow. She built a magical world that welcomes readers in and invites them to stay. You can slip away to this land with the Shining People, magic smiths, and a sinister forest.

Ursu has a sly humor that is evident within the first pages, such as in the line "The apprentice's name was Wolf, because sometimes the universe is an unsubtle place." This along with the existence of Most Spectacular Goat Cheese Day make this a book sure to win more than a few smiles and giggles.

Above all though, Oscar completely charmed me. He tries so hard. He is often completely bewildered when he is engaged in conversation with people. He takes the words they say at face value, but doesn't always understand the other bits of communication that are delivered through sarcasm or other cues. He also loves to see everything neat, orderly and in its place. I can identify with the satisfaction that comes when looking at a room that has been straightened and organized. He is intelligent and a hard worker. I loved that he maps out the day in his mind before getting down to business. I had to admire him for his work ethic and his learning methods while empathizing with his challenges regarding communication. He keeps feeling like he can't do anything right. This is something that many readers can likely relate to no matter their age.

In The Real Boy, Anne Ursu has worked her own bit of magic especially within the friendship that blooms between Oscar and a young girl. I look forward to sharing this fantasy with many students in the future.