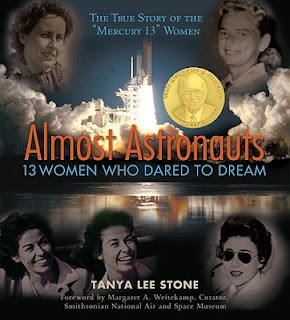 Summary: They had the right stuff. They defied the prejudices of the time. And they blazed a trail for generations of women to follow.

What does it take to be an astronaut? Excellence at flying, courage, intelligence, resistance to stress, top physical shape — any checklist would include these. But when America created NASA in 1958, there was another unspoken rule: you had to be a man. Here is the tale of thirteen women who proved that they were not only as tough as the toughest man but also brave enough to challenge the government. They were blocked by prejudice, jealousy, and the scrawled note of one of the most powerful men in Washington. But even though the Mercury 13 women did not make it into space, they did not lose, for their example empowered young women to take their place in the sky, piloting jets and commanding space capsules. ALMOST ASTRONAUTS is the story of thirteen true pioneers of the space age. -- cover image and summary via IndieBound


Review: In Almost Astronauts, Tanya Lee Stone provides a look into the lives of some heroic women. Stone opens the curtains and lets the light shine in on the ugliness of discrimination in the early days of the space program. I knew that women had limited rights for many years, but had no idea that women couldn't rent cars or get loans without a man's signature even into the '60s. Some of the indignities that the women faced were astounding. It reminded me of Wheels of Change in that I kept being amazed at comments from the men in power who wanted to maintain the status quo. So many people were unwilling to work for change. Stone points to those who tried to help, but also reveals the names of those standing in the way. I appreciated learning about these women who stepped forward and endured grueling tests and workouts in their attempts to prove themselves worthy of being astronauts.

What moved me was that I am the beneficiary of their blood, sweat and tears. As a child I did my biography report on Amelia Earhart. I dreamed of becoming a pilot. I also entertained the idea of becoming an astronaut. It never occurred to me that I could not do that, but before these women made their stand, it wouldn't have even been a remote possibility. When an astronaut came to my school in the 80s with a space suit for us to see, Sally Ride has already made her first trip. I changed my mind about careers plenty of times so I did not pursue space travel, but I am glad that they opened the way for us so that at least it is a choice young women could make.

This will be a perfect book to use with our upper grade students as they read fiction and non-fiction about the issue of discrimination. Stone delivers the information with passion and she moved me to tears on several occasions. I will not forget these women.