Book Highlight: Between the World and Me 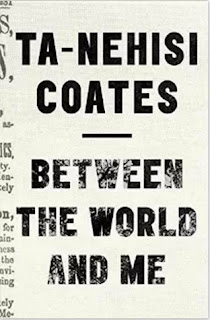 Summary: In a profound work that pivots from the biggest questions about American history and ideals to the most intimate concerns of a father for his son, Ta-Nehisi Coates offers a powerful new framework for understanding our nation’s history and current crisis. Americans have built an empire on the idea of “race,” a falsehood that damages us all but falls most heavily on the bodies of black women and men—bodies exploited through slavery and segregation, and, today, threatened, locked up, and murdered out of all proportion. What is it like to inhabit a black body and find a way to live within it? And how can we all honestly reckon with this fraught history and free ourselves from its burden?

Between the World and Me is Ta-Nehisi Coates’s attempt to answer these questions in a letter to his adolescent son. Coates shares with his son—and readers—the story of his awakening to the truth about his place in the world through a series of revelatory experiences, from Howard University to Civil War battlefields, from the South Side of Chicago to Paris, from his childhood home to the living rooms of mothers whose children’s lives were taken as American plunder. Beautifully woven from personal narrative, reimagined history, and fresh, emotionally charged reportage, Between the World and Me clearly illuminates the past, bracingly confronts our present, and offers a transcendent vision for a way forward.

Statements that caught my attention:
In talking about "government of the people," Coates brings up the question of what the term people meant over time. At the founding of our country, it did not mean women and it did not mean black individuals of any kind. (p.6)

Speaking of police brutality: "There is nothing uniquely evil in these destroyers or even in this moment. The destroyers are merely men enforcing the whims of our country, correctly interpreting its heritage and legacy." (p. 10)

When explaining his own formative years: "...I practiced the culture of the streets, a culture concerned chiefly with securing the body." (p. 24)

"The world had no time for the childhoods of black boys and girls. How could the schools?" (p. 25)

"Fully 60 percent of all young black men who drop our of high school will go to jail. This should disgrace the country. But it does not...." (p. 27)

"You cannot forget how much they took from us and how they transfigured our very bodies into sugar, tobacco, cotton and gold." (p. 71)

What I think: There is no way for me to truly know what it is like to live as a black man in the U.S. or what it's like to raise a black child in this country. I appreciate that Ta-Nehisi Coates shares his perspective and how that view was shaped throughout his life. This is a must read book for anyone, but especially for those outside the black experience.

As a teacher, the sections where he spoke of his disappointment with the school system of his childhood gave me pause. One line that really got me was "...schools were not concerned with curiosity. They were concerned with compliance." He was curious and was likely eager to learn in the beginning. Have we changed this at all or do we still have no time for the childhoods of black boys and girls? Are we still more concerned with compliance than with the student and what they need? It would seem so when we look at the suspension and dropout rates of our young black students.

There is much to think about in this letter to his son. Will change happen? Will I contribute to maintaining the status quo or will I help to make change?
Posted by Crystal at 5:30 AM

Email ThisBlogThis!Share to TwitterShare to FacebookShare to Pinterest
Labels: Between the World and Me, Ta-Nehisi Coates