Review: What We Left Behind 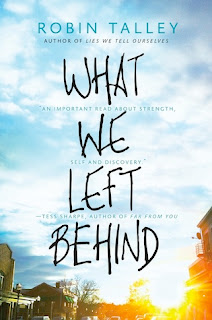 Summary: Toni and Gretchen are the couple everyone envied in high school. They've been together forever. They never fight. They're deeply, hopelessly in love. When they separate for their first year at college—Toni to Harvard and Gretchen to NYU—they're sure they'll be fine. Where other long-distance relationships have fallen apart, their relationship will surely thrive.

The reality of being apart, however, is a lot different than they expected. As Toni, who identifies as genderqueer, falls in with a group of transgender upperclassmen and immediately finds a sense of belonging that has always been missing, Gretchen struggles to remember who she is outside their relationship.

While Toni worries that Gretchen, who is not trans, just won't understand what is going on, Gretchen begins to wonder where she fits in Toni's life. As distance and Toni's shifting gender identity begins to wear on their relationship, the couple must decide—have they grown apart for good, or is love enough to keep them together?  -- summary and cover image via Goodreads

My thoughts:  Toni is doing some serious soul searching. Toni dresses in what many people would call a masculine style and had internally used the label butch. Until recently, Toni used female pronouns, but decides to eliminate pronouns altogether. Toni’s girlfriend Gretchen has been very accepting and even encouraging about this change and is respectful of the questioning Toni is going through. However, she doesn't really understand all that Toni tells her and is afraid to ask questions for fear of offending Toni or looking clueless.

Robin Talley definitely lets us see into the many questions and concerns Toni is having as a genderqueer person. Toni had identified as a female up through high school, but hadn't conformed to gender expectations - especially regarding clothing. As Toni begins college, the questioning about gender becomes intensified. Some of the dialogue around the questioning seems problematic though. There is significant discussion around the usage of and types of personal pronouns Toni and others prefer. By the time it is all said and done, there seems to be a bias against the new terminology (by Toni and others). This includes them/their and zie/hir. There are statements about how it’s too difficult to change etc….

The term genderqueer is an open one, but Toni likes it for that aspect. I found it was generally portrayed in this book like a transitory state. It implied that a person is genderqueer before transitioning to male or female. It may happen that someone moves along that path, but that is not the only meaning and is definitely not the most common meaning. One problematic moment is when Pete calls Toni over saying,"We're having a support group meeting for the formerly genderqueer!" I'm not genderqueer, but this seems like it isn't the best possible representation.

This is a coming of age novel. Gretchen and Toni are both trying to find out who they are and the time apart is one way they can do this, but it's hard on both of them to be on their own. I appreciated this contemporary look at two freshmen working through their identities and dealing with a long-distance relationship too. I was excited to see that the book would include a genderqueer character, but overall, I was disappointed in the portrayal.
Posted by Crystal at 4:00 AM

Email ThisBlogThis!Share to TwitterShare to FacebookShare to Pinterest
Labels: book review, Robin Talley, What We Left Behind