Review: Everything You Wanted to Know About Indians But Were Afraid to Ask 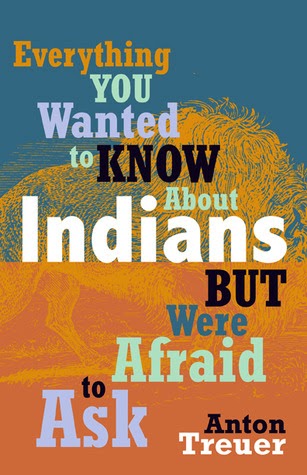 Summary: “I had a profoundly well-educated Princetonian ask me, ‘Where is your tomahawk?’ I had a beautiful woman approach me in the college gymnasium and exclaim, ‘You have the most beautiful red skin.’ I took a friend to see Dances with Wolves and was told, ‘Your people have a beautiful culture.’ . . . I made many lifelong friends at college, and they supported but also challenged me with questions like, ‘Why should Indians have reservations?’ ”

What have you always wanted to know about Indians? Do you think you should already know the answers—or suspect that your questions may be offensive? In matter-of-fact responses to over 120 questions, both thoughtful and outrageous, modern and historical, Ojibwe scholar and cultural preservationist Anton Treuer gives a frank, funny, and sometimes personal tour of what’s up with Indians, anyway.

• What is the real story of Thanksgiving?
• Why are tribal languages important?
• What do you think of that incident where people died in a sweat lodge?

White/Indian relations are often characterized by guilt and anger. Everything You Wanted to Know about Indians But Were Afraid to Ask cuts through the emotion and builds a foundation for true understanding and positive action.

Review: Many non-Native people have ideas about what it means to be Indian. They may or may not ask the questions that bounce around in their heads. They may not even know which questions they would ask if given a chance. In this book, Anton Treuer shares his answers to many questions and "offers a critical first step to comfortably dispel erroneous imaginings and develop deeper understandings."

This is a good beginning place for learning about Indians. It isn't meant to be exhaustive, but attempts to provide answers to common questions in a way that is easy to understand. He took very complex issues and explained them simply and with diplomacy.

As he delved into the history, he noted, "We cannot afford to sugarcoat the dark chapters of our history, as we have for decades upon decades." He brings some of the dark moments out into the light - not for purposes of making people feel guilty - but to see that these moments aren't repeated and to work towards healing.

Along with history, Treuer focuses on terminology, religion, culture & identity, powwow, tribal languages, politics, economics, education, and the future. He covers many topics, but they are in small bite size pieces for the most part. The book isn't necessarily meant to be read cover to cover in one sitting.

There were several things that stood out to me as an educator in Wisconsin. The first big revelation was The Great Seal of the Territory of Wisconsin (you can see it here). The Latin caption on the seal says "Civilization Succeeds Barbarism" and there is an Indian facing west towards a steamship. This would likely be one of the Ho-Chunk who were forcibly moved to Nebraska. I have seen the state seal, but hadn't ever looked at the territory seal. This would definitely be something to look at critically with students when discussing the history of Wisconsin and the perception of settlers in the 1800s. It would also create space for discussion of the Ho-Chunk perspective.

Throughout the book there are issues that could generate guilt or anger, but Treuer points out that these emotions aren't going to fix anything. Fortunately, he also includes a section about what people can do moving forward.

This is a great book for educators, but I would recommend it to anyone who has gathered knowledge of Indians primarily via history classes and the media.

Extras:
An excerpt of the book may be found at Indian Country Today Media Network
An Interview with Anton Treuer on Minnesota Public Radio

-- Cover image and summary via Goodreads
Posted by Crystal at 4:00 AM

Email ThisBlogThis!Share to TwitterShare to FacebookShare to Pinterest
Labels: Anton Treuer, Everything You Wanted to Know About Indians But Were Afraid to Ask