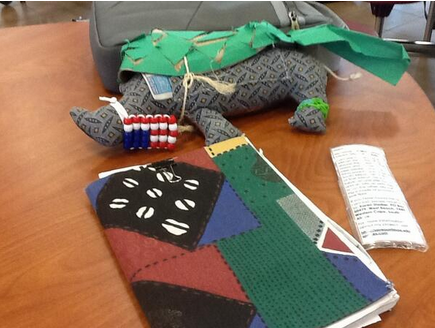 I got to meet Makulu at EdCampMadWI and read some of his journal yesterday. He is traveling with Tim Nielsen @teach1tech right now and is part of a learning project from South Africa similar to what people have done with Flat Stanley. We might even get a visit at our school before Makulu moves on to another state.

If you weren't able to make it to EdCamp Madison, here is a tagboard of the tweets. Also, the schedule has live links to pages of notes that were taken in sessions. I appreciate that because I wasn't able to go to all of the sessions that I was interested in, but at least I can see some of the ideas and resources that were discussed.

My first session was on Gamefication. This was not on how to use video games in the classroom like some people might assume, but rather on how to use a game type model for motivation in the classroom. For example, Michael Matera (@mrmatera) the presenter, has a courtly type of situation set up in his class with guilds and the students are vying for control of the kingdom. I felt that it was much like the Oregon Trail simulation type of learning activity that I participated in when I was in 8th grade where we were in wagon train teams and each day there were learning activities in a game type situation. I still remember that because it involved a bit of drama and was not simply listening to a lecture or reading a textbook to learn the history.

My second session was Race Equity in Education. There aren't notes for that one, but it was a good time to hear what is going on in this area in other districts. We are at varying stages of awareness and change.

The next session I attended was one on Makerspaces. Karie Huttner led the session. Her website is www.icreateilearn.weebly.com We got some information on 3D printing at the elementary level in addition to coding and many more ideas for what students can do in Maker Spaces. This is one more encouragement for me to get going with that.

My final session was on Diversity in Literature. I actually proposed that one and led it. I enjoyed having the time to talk with other librarians about the resources we have available. I did learn that one ought to set up the sharing document for notes ahead of time or have a participant do it. I didn't think about it and was trying to get it done while the session was happening so then I thought it was shared for editing, but nobody could contribute notes. I didn't realize that until after the session and just figured nobody was in the document. :(  I learned the hard way - but I bet I won't do that again.

There is another EdCamp scheduled in April that I would like to go to. It will be in Eau Claire so the drive will be a bit shorter. Yay! And even better - there is talk of having one in the Onalaska area. That would be really cool.

This was another great day of learning and I am so thankful to the organizers for making it all happen!