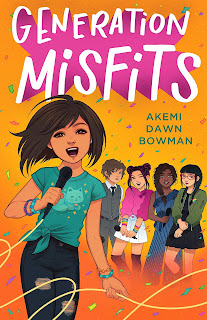 Title: Generation Misfits
Author: Akemi Dawn Bowman
Publisher: Farrar, STraus, Giroux
Pages: 352
Review copy: Digital ARC via Netgalley
Summary: Millie is attending a real school for the first time, and she dreams of finally having friends and a little bit of freedom. She finds her chance when she joins an imitation band of her favorite J-Pop group, where she's thrilled to meet a group of misfits who quickly become a tight knit group of friends that are like family.But Millie soon realizes that one of them is dealing with problems bigger than what notes to hit when it comes time for their performance. Can Millie help her friend, even when their problem feels too big to say out loud?

My review:  I did not expect to cry, but the tears welled up more than once. Sometimes because my heart hurt and sometimes they were happy tears. The cover made me think this was going to be an exciting and upbeat book--and it was. But it was definitely more than just a light friendship story. Everyone has struggles they are working through.The main character has been homeschooled and now is beginning sixth grade at school. I was concerned that the book was going to make homeschooling seem like a horrible thing since Millie had a very negative opinion of it in the beginning. That is balanced out a little later in the book though. So often young people feel like they may never find people they can really connect with and this book will be easy to relate to for those readers. This would be especially true for those who have unique music tastes. It really was fun to see the friends in all of their excitement and effusiveness about their J-Pop band and the gloriousness of finding other who share their enthusiasm. One character is nonbinary and uses them/they pronouns. That isn't explained initially so it really isn't something that stands out as an issue for anyone. Later in the story there is a conversation that goes into it a bit when a friend is seeking to understand, but it isn't a conflict it's just part of the character.Each person is distinct and they are all discovering things about themselves as they learn more about each other. They hurt each other along the way, but they also strengthen each other. Through it all they are learning to be true to themselves.
Recommendation: This will be a great middle grade book to hand to those who enjoy contemporary fiction or music or friendship stories.
Extra:
Video discussion with author along with two authors of books featuring music.
Posted by Crystal at 11:00 AM