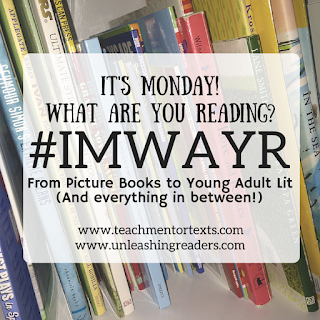 It's Monday! What are you Reading? is a meme hosted by Kathryn at Book Date. It's a great way to recap what you read and/or reviewed the previous week and to plan out your reading and reviews for the upcoming week. It's also a great chance to see what others are reading right now...you just might discover your next “must-read” book!

Kellee Moye, of Unleashing Readers, and Jen Vincent, of Teach Mentor Texts decided to give It's Monday! What Are You Reading? a kidlit focus. If you read and review books in children's literature - picture books, chapter books, middle grade novels, young adult novels, anything in the world of kidlit - join us! We love this meme and think you will, too. We encourage everyone who participates to visit at least three of the other kidlit book bloggers that link up and leave comments for them.

If you go to my Goodreads account, you can see what I have read recently & click on the books to learn more. 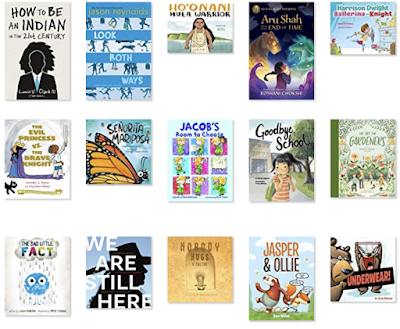 How to Be an Indian in the 21st Century (YA+) is a wonderful collection of poems and the author is from WI so that added interest for me. Look Both Ways (middle grade) is a unique collection of interrelated short stories. Ho'onani Hula Warrior is a picture book re-telling of a documentary film about a young Hawaiian who feels that girl or boy as a designation doesn't always fit for everyone. There is a middle space and that is where Ho'onani is most comfortable. Ho'onani has people who support this identification and a space is held for people in this middle place in the Hawaiian culture - at least there had been until first contact with non indigenous people. There are people who are trying to make sure this is again something that is honored and accepted. Because both the picture book and the documentary are created by outsiders, I was worried, but for the most part, it seems to keep Ho'onani's perspective centered. It would be a powerful way to enter into discussion with people about what it means to be nonbinary. Aru Shah and the End of Time was a fairly light-hearted fantasy. I think it was modeled after Percy Jackson (it's part of the Rick Riordan Presents), but it's not as polished. Some people with Indian background have expressed concern about how the mythology/religion is presented, but I really can't speak to that. I get that it may be tricky though because these deities are actually still part of an ongoing religious belief unlike most of the deities in Greek/Roman mythology, so I can see how care would need to be taken.  The princess and knight books I read (two this week) were okay, but nothing that made me gasp and get excited.

Señorita Mariposa is nice, but the bilingual text is a bit confusing. English is in one style of font and Spanish is in another. But not always. There are a few lines where it is swapped. I didn't really like that part because it popped me out of the text momentarily. It wouldn't be a problem for those fluent in both languages though and isn't a huge problem anyway. Jacob's Room to Choose is a little didactic and deals with who should be able to use which restrooms. It's welcoming and would be very helpful for having discussions around this issue. It also shows that clothing and other aspects of presentation don't always indicate gender and that gender doesn't have to be such an intense focus. None of the other picture books were super big standouts for me, but were just okay. We Are Still Here (YA+) is a fantastic collection of photos from the American Indian Movement. They're accompanied by some history of the movement. The photos were truly phenomenal. The history is nice to have with though.


The Coming Week:
I will be reading Twinchantment, Focused, and more children's lit for the committee I am serving on since I didn't do it last week like I planned. I am also still reading Lost at School for work. Have a great week.

Email ThisBlogThis!Share to TwitterShare to FacebookShare to Pinterest
Labels: It's Monday, It's Monday!