My One Word - Smile 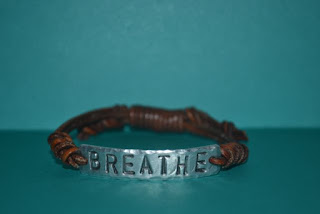 In 2015, "Breathe" was my One Word for the year. At school we were going through a major building renovation and I knew there would be many stressful moments so I wanted to focus on my breathing. I started doing yoga again and a friend gave me the bracelet you see in the photo above. Recently I was wearing it at school and a student asked me what it was. I gave her a pretty honest answer. I told her my bracelet was there reminding me to take a nice deep breath before speaking so I wouldn't say something I would regret later. I think my word did help me this yea, but on some occasions, I was still not my best self.

I will need to keep my breathing in mind this year too, but as I think about a new word for 2016, a slightly light-hearted word keeps bouncing around in my head - Smile. I've been listening to the soundtrack to Hamilton. In the song "Arron Burr, Sir" a line is "...talk less, smile more." I don't necessarily believe the idea he is proposing - that one should listen, smile and not allow people to know what your opinions are. I do think though, that smiling more would be a good thing for me and the people around me.

Here are a few great songs about smiles:


I found a great TedTalk by Ron Gutman called "The Hidden Power of Smiling" and he convinced me that this would be a great word to adopt for the year.


I would like to practice smiling more despite how I am feeling. I want to share a smile with others. I also want to think about those things that make me smile and work to do them more often.

"Let us always meet each other with smile, for the smile is the beginning of love." Mother Teresa
Posted by Crystal at 6:08 PM

Email ThisBlogThis!Share to TwitterShare to FacebookShare to Pinterest
Labels: My One Word