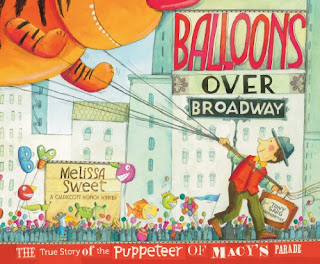 Balloons Over Broadway by Melissa Sweet is a wonderful way to learn the history of the Macy's Thanksgiving Day Parade.  In addition, the book is a fantastic work of art itself.  Melissa used unique collages to illustrate the text.  The illustrations really fit in well with the picture she paints of Tony Sarg, the puppeteer that engineered the giant balloons in Macy's parade.  He was an inventor that used anything around him creatively to solve problems.  I loved learning that the parade grew as a way to honor the traditions of the immigrant staff members of Macy's and allow for celebration.  Mostly it was just fun to see the way Sarg invented whatever he needed and kept trying things that might have seemed impossible to other people.


Here is a video showing how the modern balloons are inflated before the parade.  In the book, it said they used sandbags to restrain the balloons, but now they use nets.

In the video below, you get to see how they test out the balloons and practice moving as a group.

A sample of some typical things seen in a Macy's Parade

It was cool to learn that Tony Sarg also had two apprentices.  One, Bill Baird, went on to create the puppets seen in the movie The Sound of Music (video clip on YouTube).  The other was Jim Henson, who created The Muppets.

Here's is the latest incarnation of The Muppets opening during Thanksgiving week.