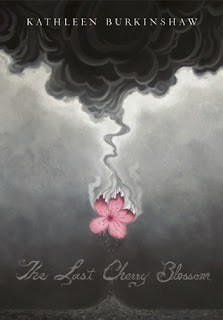 Summary: Yuriko was happy growing up in Hiroshima when it was just her and Papa. But her aunt Kimiko and her cousin Genji are living with them now, and the family is only getting bigger with talk of a double marriage! And while things are changing at home, the world beyond their doors is even more unpredictable. World War II is coming to an end, and Japan's fate is not entirely clear, with any battle losses being hidden from its people. Yuriko is used to the sirens and the air-raid drills, but things start to feel more real when the neighbors who have left to fight stop coming home. When the bomb hits Hiroshima, it’s through Yuriko’s twelve-year-old eyes that we witness the devastation and horror.

This is a story that offers young readers insight into how children lived during the war, while also introducing them to Japanese culture. Based loosely on author Kathleen Burkinshaw’s mother’s firsthand experience surviving the atomic bombing of Hiroshima, The Last Cherry Blossom hopes to warn readers of the immense damage nuclear war can bring, while reminding them that the “enemy” in any war is often not so different from ourselves.

Review: The Last Cherry Blossom pulled me into the past and held me there from beginning to end. Yuriko and her family are living in wartime Japan and the author brings readers into their daily life. I thought that the book was mostly going to be about the bomb in Hiroshima, but the vast majority of the book is about life before the bomb. Readers get to see into the everyday activities and worries of children during the war. It was interesting to find out that in the media the government was narrating a story about the war that was inconsistent with what was actually happening. Though the news was announcing victories, you see the clues piling up that show a country at the end of its rope. There is no more metal for constructing more planes, they're looking for alternative fuel because they are running out and they have enough workers to be making more things, but there simply aren't enough supplies.

Aside from the war issues, Yuriko is slowly discovering secrets within her family. These secrets will shake her world. Fortunately, Yuriko has a good support system. I love seeing Yuriko's relationships with her family and with her best friend Machiko. Again, the author seemed to aim for showing everyday interactions and typical activities. I really got a sense of what life would have been like for a wealthy young Japanese girl during the war. With Machiko, we also got to see what it was like for someone with less money and standing. Machiko eventually has to start working in a factory by order of the government.

And then there is the bomb. Obviously, that is a disturbing part of the book. There is no way to make that day easy to recount. The fear, death, pain, and gruesomeness of such an event is evident. This is an ugly piece of history seen through the eyes of a young girl. War is terrifying and deadly. It's a truth expressed clearly through Yuriko's experiences. This would be an excellent book to use for discussion around war and how it affects the individual people in a country.

Readers may want to have some tissues handy, but Yuriko does have a bit of hope at the end which keeps it from being entirely overwhelming for sensitive readers.

Following the story, Burkinshaw provides an afterword explaining how the book came to be. It was loosely based on memories of her mother who grew up in Hiroshima and was twelve when the bomb was dropped. She also included a selected bibliography and information about the Japanese words in the book along with a glossary. One thing that had a big impact on me was the page of statistics. When I looked at the numbers after having been immersed in the lives of the people affected, I was overwhelmed. 80,000 people died immediately and 140,000+ died within the next five years. The loss of life is staggering.

Recommendation: This is an excellent choice for readers who enjoy historical fiction. It would be a great addition to classroom and school libraries especially if WWII is part of the curriculum and would be perfect for a book club or discussion group.
Posted by Crystal at 9:19 AM