Celebrating the Ability to Move

Ruth Ayres has a link-up on weekends where people link to posts that are celebrations about their week. I love this reminder to celebrate every week. 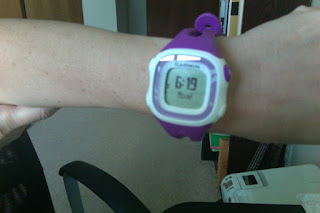 I'm celebrating the ability to move. For Mother's Day I was given a new running watch. I wore it for our school Fun Run on Friday morning and forgot to take it off. Later, I was sitting at the computer and noticed that it said, "Move!" on the screen. I'm not sure how much time it allows one to be sedentary before it fusses, but I had obviously exceeded that amount. It also counts my steps. I didn't realize it had these extra functions. Surprise. :)

Since the Turkey Trot in November, I've run only a handful of times and never more than once in a week. I hadn't gotten back into the groove of running. This week was the breakthrough week though. I ran four times! The runs were never particularly far, but I was out and moving once again.

Yay for moving! Now I can be a part of #RunTeacherRun again. They're a great Twitter group that shares about their running lives.
Posted by Crystal at 9:37 PM