Review: Revenge of the Angels 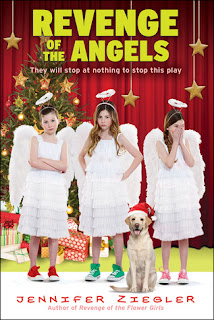 Summary:  The Brewster triplets from Revenge of the Flower Girls meet The Best Christmas Pageant Ever, in a new, sweetly hilarious holiday story from Jennifer Ziegler!

When we last saw them, Dawn, Darby, and Delaney Brewster stopped their big sister from marrying the wrong guy, proving that they can accomplish a lot when they work together. Now, they are turning their smarts and high-energy hijinks to something completely different: their local Christmas pageant! They've been practicing looking wise and stroking long, fake beards in preparation for their roles.

But what if they're not cast as the wise men? What if instead they have to play angels in the pageant? Distasteful. Deplorable. Dreadful. And it's not like anything else is going their way this holiday season, either. Can the triplets figure out what to get for their mom, solve a mystery about a stolen Santa, and recover their holiday spirit in time for the pageant? Of course they can! And they'll do it with humor and charm, or they're not the Brewster triplets.

Review: The Brewster triplets made me laugh. That they wanted to be wise men was fantastic and I was rooting for them the whole time. They plotted and planned and worked towards their goals even when they seemed nearly impossible.

This book worked much better for me than the first one. I had trouble keeping the triplets straight in Revenge of the Flower Girls, but that became easier in this second book. I also appreciated that there were several plot lines, but this time none of them seemed quite so serious as the prevention of a marriage. Added together though, they provided just the right amount of tension.

The girls keep getting themselves into trouble, but they also manage to help each other back out of it. I had to giggle as they fell in and out of scrapes throughout the book. The girls use both their wits and courage to solve their problems and it was a fun time watching it all unfold. This is a nice light realistic middle grade novel that is sure to be a hit especially around the holidays.

-- Cover image and summary via Goodreads
Posted by Crystal at 4:18 PM