Review: If I Ever Get Out of Here 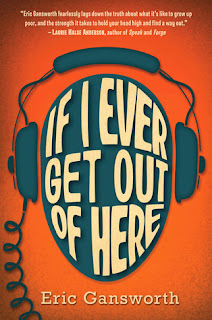 Title: If I Ever Get Out of Here
Author: Eric Gansworth
Publisher: Arthur A. Levine Books
Pages: 368
Available: On shelves now
Review Copy: Netgalley and Library Copy

Summary: Lewis "Shoe" Blake is used to the joys and difficulties of life on the Tuscarora Indian reservation in 1975: the joking, the Fireball games, the snow blowing through his roof. What he's not used to is white people being nice to him -- people like George Haddonfield, whose family recently moved to town with the Air Force. As the boys connect through their mutual passion for music, especially the Beatles, Lewis has to lie more and more to hide the reality of his family's poverty from George. He also has to deal with the vicious Evan Reininger, who makes Lewis the special target of his wrath. But when everyone else is on Evan's side, how can he be defeated? And if George finds out the truth about Lewis's home -- will he still be his friend? -- cover image and summary via Goodreads

My Thoughts: I had really been looking forward to reading this book after reading the review from Debbie Reese at American Indians in Children's Literature. Whenever she raves about a book, I know I will love it or at the very least find something that makes me think. I was not disappointed. It was everything I had hoped it would be and more. If I Ever Get Out of Here is a look into the life of a boy as he's coming of age. Like many young people, Lewis is searching for his identity. He thought he knew who he was, but as he comes into more contact and closer relationships with people outside his reservation, he questions himself. He straddles that line of embracing his home culture and feeling the need to distance himself from it so he can fit in with the mainstream culture of his classmates.

Gansworth has crafted an intriguing story that will appeal to a wide variety of young people with music, humor, fights, friendship, and romance. He wove the music of the Beatles and Paul McCartney throughout using songs as chapter titles and within the storyline too. Music is something that can connect people across age, gender, and even culture lines. We don't have to share the same background to share an enjoyment of music.

I loved the subtle and not so subtle moments of humor in the story. Lewis and his friends and relatives hassle each other as part of their way of bonding with rather rude nicknames like Stinkpot. Often though, the humor is just his matter of fact rather deadpan style like the exchange with his mother after he had someone cut off his braid.
"You look like a Welfare Indian."
"I am a Welfare Indian," I said.
"You don't need to look the part," she said.
Another example is way back in the acknowledgments. Even there Gansworth is still cracking jokes. He begins, "If you're reading this book for class, you can skip this page. There will surely not be a quiz on any of this information."

Along with humor, Gansworth has included quite a few heavy topics. Bullying and how to fight or not fight takes up a good deal of the book. More importantly, friendship is examined. Friendship across cultural lines can be an amazing thing, but it can also be difficult and Gansworth reveals this over and over again.

Another aspect of this book mentioned within the first five pages is the history of the Indian boarding schools and the long-term damage that they caused. The effect of the Indian boarding schools is far reaching and is being brought to light in more and more works of children's literature (there are a few titles for older readers in this list also).

The boys start navigating the waters of dating before too long. This brings up the complications of dating and marrying non-Indians. If a man married a non-Indian, their children wouldn't have legal status as an Indian. That is some heavy stuff to think about as a middle-schooler and being the kid that he is, Lewis is thinking about it.

I would highly recommend this book to any young adult. Lewis and George come alive in the book and there are so many fabulous personalities. Lewis's Uncle Albert and George's father add great voices to the story. I am going to be sharing this title with many people because these characters should not be missed.

Extras:
Discography - Gansworth provides a YouTube playlist that goes with the book
Excellent interview with Gansworth by Edi Campbell on her blog Crazy QuiltEdi

Email ThisBlogThis!Share to TwitterShare to FacebookShare to Pinterest
Labels: If I Ever Get Out of Here