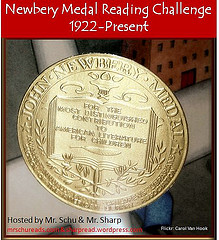 I am finally getting my ducks in a row. I wanted to make a spreadsheet of the Newbery winners so I can kind of wrap my head around what we have been through over the past year in the Newbery Challenge. As I fill in the chart, I easily see the difficulty of the first few decades. In response to Daniel Boone I wrote:  It set my teeth on edge. Bad enough when referencing them [Native Americans] as red savages and similar comments, but these types of comments were just ridiculous, they "met personal tragedy of violent death with serene indifference." Really? Is that what it was?

Early on I commented to a friend on Goodreads, "Going through the Newberys in order is rather painful. It's like going through a patch of weeds and occasionally finding a beautiful flower, but more often than not getting stung by nettles."

The low points for me were Shen of the Sea, Waterless Mountain, and Daniel Boone. The Story of Mankind was also tough to slog through since it was written like a history text, but it wasn't quite as horrifyingly offensive as the other three.

Fortunately, the first few decades had a few good ones to balance out the misery. Invincible Louisa and Thimble Summer were favorites for me.

I am enjoying this trip over the past year and will be interested to look at the overall picture I have when I finish the whole challenge. This has been an adventure and it has been fantastic sharing the journey with other Nerdybookclub members. Recently I've had some wonderful books to read like Missing May, Bridge to Terabithia and Number the Stars and we still have some awesome books coming up. The beginning of the challenge was exactly that -- a challenge, but the later books have made it all worth it. Also, I appreciated seeing the progression and development of children's literature over time. I'm definitely glad I started out on this path. So far since January 1, 2012, I have read the winners from 1922 through 1993. There are twenty more for me to finish. It's pretty cool that one of them will be announced within the next few weeks. It makes this year's award announcements seem even more fun. Happy reading!